How to Prepare for the Coming Persecution

As you know, on Friday, June 26th, the Supreme Court ruled that homosexual couples have the right to marry nationwide thus establishing a new civil right in our land.  In effect, by their 5-4 decision, five unelected lawyers redefined the meaning of the word “marriage” and changed the landscape for Christians, and the church, in this country forever.

Simply this, what has been historically deemed as deviant behavior by our society and as a sin and an abomination by the Bible and the church, is now the Law of the Land.  Those who oppose that Law will be guilty of just that, violating the Law.  And in violating the Law the full force and weight of the State will come against those who hold uncompromisingly to Biblical values and a Biblical worldview in an effort to crush them and bring them into submission and compliance. The door is now wide open for full-scale persecution of the church in America and, unfortunately, most Believers have their head buried neck deep in the sand hoping this is some bad dream, some nightmare, that will soon go away.

Wish again, my friends.  The nightmare is here and it’s here to stay.

Remember, this is not the first time the Supreme Court made an infamous ruling and defiantly shook its fist in the face of God.  In 1857, the Dred Scott v. Sandford decision essentially stripped African Americans of their right of personhood and relegated them to the status of a mere possession, a slave.  It took a bloody Civil War and the Emancipation Proclamation by President Abraham Lincoln to correct and set right what wrong the Supreme Court decreed.

But the evil and injustice of this ruling, as reprehensible as it was, was not forcibly imposed upon Christians and the church.  As Christians, we had the right and the duty to follow the clear teachings of Scripture and our own conscience and reject the ruling by treating people of color the same way we would treat each other.

Then, on January 22nd 1973, in Roe v. Wade and Doe v. Bolton, the Supreme Court again ruled against God and basic human dignity when they denied the unborn the rights of personhood and life.  They held, by a 7 to 2 vote, that a woman’s right to privacy and choice trumps an unborn child’s right to life.

And 80 million unborn children have died.

But again, Christians in this country were not forced, under penalty of law, to participate or even endorse abortion. We had the freedom, and the responsibility, to speak for those who could not speak for themselves (Prov. 31:8) and to stand against this horrific holocaust.  And the church did just that, by the thousands. Crisis Pregnancy Centers sprang up all over the land as well as homes for unwed mothers and the like.

But this time, the Supreme Court ruling is different. With the Obergefell v. Hodges decision, gay marriage and the homosexual lifestyle has now been elevated to the lofty position of a civil right.  To speak against it, like Christians did in the Dred Scott and Roe v. Wade decisions, is tantamount to a crime. A potential hate crime.

And this ruling, unlike in the past, has been forcefully imposed on the Christian and the church.  It has become the Law of the Land, cast in judicial stone.

As the Law of the Land, the civil rights of a legally protected class of sins now trumps the religious liberty of the majority of Americans.  The application of this ruling in real time will be the attempt to govern and control all speech about homosexuality contrary to the ruling.  Anything deemed politically incorrect, anything that speaks against the recent ruling, anything that offends the sensibility and well-being of the homosexual community, will be smacked with the labels of “intolerant” or “homophobic” or “hate speech.”  This will mean our cherished freedom of speech will soon be subservient to the civil rights of a protected homosexual minority.

But how will this affect each of us? you wonder.

Just think, there are now passages in the Bible that our courts have ruled as potential hate speech.  Why?  Because they offend the civil rights of a protected minority.  Those who feel otherwise will soon be stripped of their right to speak in the public square, to share their opinions or sincerely held convictions openly, or to worship anywhere but in solitude and privacy of our own closet.  In their view, we have no choice but to comply.  The acceptance of homosexuality and gay marriage is settled law, it’s now the new Law of the Land.  It will soon be a hate crime for a preacher in a local church to accurately teach what the Bible says about homosexuality.  And if he does, watch out.  Why?  Because defiance of the Law of the Land always comes with unwanted consequences.

They have taken the battle to us and are forcing us to take a stand, to choose whose law we will obey.

If we obey man’s law and compromise and capitulate to the legal perversion set before us, we can probably live relatively quiet and peaceful lives.  But if we stand for Biblical truth and commit, like our Lord, to being light in darkness (John 1:5), then we will certainly find ourselves at odds with Caesar, and we will soon discover what persecution tastes like. 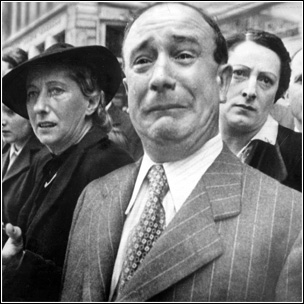 I know many of you may reject what I’m about to say, but I see us as Christians in America in the same place the Jews found themselves in 1935 in Nazi Germany. Yes, you heard me right. I see us as living in Germany in 1935.

The parallels are striking.

This ruling shows us clearly that the Rule of Law in America is dead.  The Supreme Court now changes law to push its own agenda and has become, like the Executive and Legislative branch of our government, compromised and untrustworthy.  In essence, the Republic we’ve all come to love and respect is no more.  It has been replaced by those who will twist and manipulate the law and media to fit their own desired end.  Widespread corruption, habitual lying, and dishonesty in the highest places, in all three branches of our government, leave us distressed as citizens of this great country.

But the same thing happened to the citizens of Germany in the early 30’s.  They also saw their sacred institutions, the church, the school, the family, and the government, hijacked and taken over by unscrupulous, evil men who would stop at nothing to achieve their selfish ends.

And what was the result of those ends?  World War II.  Over 60 million people dead, which was over 3% of the earth’s population in 1940.  And the atrocities against the Jews?  Utterly unthinkable.  That is until we discovered the ovens of Dachau, Auschwitz and Ravensbruck.

“But, that could never happen to us in America.”

Why? Because we’re better or more loving or more tolerant than the good citizens of Germany?  Open your eyes and look around.  Read the headlines.  Do you see a sense of civility and tolerance towards the church today?  Have you read the vile and vicious comments made by the good citizens of this country to those who hold, for example, a Biblical view of marriage?  Do you trust your President to do what is honorable and right according to the Law?  Or have you forgotten Benghazi, the IRS targeting of conservative groups, the ATF and “Fast and Furious” scheme, among countless others?  And, of course, there are the cover ups and almost criminal delays in trying to get the Government to honor subpoenas by the Congress or Freedom of Information requests from others to try to get to the bottom of all these scandals.

Do you still not believe the persecution is coming?

Listen to what a few notable voices say about the recent ruling and the chilling effect it will have on Christians and those who hold to a traditional view of marriage.

The majority attempts, toward the end of its opinion, to reassure those who oppose same-sex marriage that their rights of conscience will be protected. We will soon see whether this proves to be true. I assume that those who cling to old beliefs will be able to whisper their thoughts in the recesses of their homes, but if they repeat those views in public, they will risk being labeled as bigots and treated as such by governments, employers, and schools.

“I believe a barrage of court cases has already been planned against those who hold to politically incorrect views of marriage. Many of us will be dragged into court to be prosecuted or subjected to civil judgments. Some will lose their jobs, while others forfeit their businesses. Some will be persecuted and ridiculed and fined. Some may go to prison as the years unfold. Since same-sex marriage has now been determined to be a universal human right by the highest court in the land, it will trump religious liberty, churches, seminaries, Christian schools, businesses and a host of individual liberties. I also fear judgment will befall this once great nation.”

Dr. James Dobson
Focus on the Family and Family Talks

Don’t be naive or deceived, persecution will come.  And it will come quickly.  To reiterate, we are basically living in Nazi Germany in 1935.
And for the church, we’d do well to remember what that means.

Edmund Burke once said, “Those who don’t know history are destined to repeat it.”

And Georg Wilhelm Friedrich Hegel also said, almost prophetically, “The only thing we learn from history is that we learn nothing from history.”

Let that not be said of the church today.